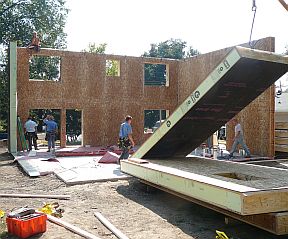 What is a Passive House?

The passive house concept was pioneered in the Northern U.S. and Canada in the late 1970s and early 1980s when it was called “superinsulation”. European builders have improved the superinsulation technology and applied it to both single-family dwellings and apartments. The Passive House founders, including Dr. Wolfgang Feist, believe that reducing building energy consumption to one-tenth of its current amount is both cost-effective and morally imperative. Architect Katrin Klingenberg is the founder of the Passive House Institute USA.

The most unique feature of a Passive House is that it’s designed to be conditioned by ventilation air. So if the maximum ventilation that a 2000 square foot home requires is 120 CFM, then that amount of airflow must also carry the heating and cooling to the home’s rooms. In a standard American home the airflow would be around 1200 CFM. 12o CFM isn’t very much airflow and it won’t carry much heat to or from the rooms. This one performance standard necessitates R-values above 40 all the way around the building and an airtight building shell. The additional Passive House standards simply reinforce the challenge issues by limiting the airflow.

Here is a summary of the physical requirements for Passive House certification for a new home.

Install no more than 1 watt of heating per square foot of floor space.

For more information, see The Homeowners Handbook to Energy Efficiency or go to the Passivehouse Institute USA website.