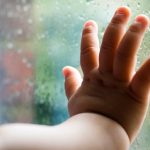 I read a 2011 report today on extreme cold-weather qualitative testing for window treatments by the Cold Climate Research Center (CCRC) in Fairbanks Alaska. The experimenters compared the performance of shutters, blinds, storm windows, and curtains installed on double-pane insulated glass windows (which, experimenters assume, has inadequate thermal resistance for the Alaska climate). 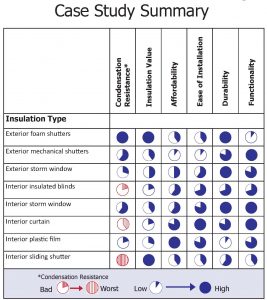 Interior curtains, blinds, and shutters failed the qualitative testing because they increased window condensation compared to double-pane insulated glass. Condensation increased because these interior window treatments reduce the temperature of the window glass without stopping moist indoor air from moving in next to the glass and depositing condensation and ice on the window. No surprise here.
Exterior rolling shutters and sliding foam shutters got fairly high marks from the CCRC for condensation resistance and insulation value. However the affordability and ease of installation prevent the widespread use of these exterior window treatments.
The best performers, in my reading of the CCRC report, are the interior and exterior storm windows. Both interior and exterior storm windows reduced condensation compared to the double-pane insulated glass by itself. Affordability, insulation value, durability, and ease of installation for the storm windows were all rated good.

Tips for your Storm Windows

Here are some ways I’ve used to make storm windows cost-effective and valuable to the occupants.

For more information on windows see our books: Residential Energy and Homeowners Handbook to Energy Efficiency.