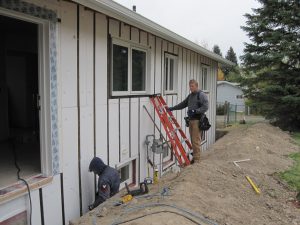 
Costs and Benefits of Superinsulation

My most successful superinsulation retrofit, which is my current home, uses less than 20% of what ASHRAE calls an energy-efficient home according to ASHRAE standard 90.1.  The 2700 square foot home uses around 350 therms and 4500 kWh with its two occupants. My superinsulation retrofit cost around $45 per square foot including kitchen, bathroom, and basement remodeling.

The superinsulation retrofit strategy is to air-seal and insulate the existing structure from outdoors. This strategy allows the residents to remain and avoids having to demolish the interior finish and to treat the difficult and discontinuous surfaces from indoors.
My strategy on my last retrofit included these steps.

Controlling the labor for trimming around windows is one of the key components. Our Duxton windows have a 3.5-inch exterior jamb extension that is a real labor saver. It allows you to run the foam over the window’s rough framing to prevent thermal bridging. I installed a foam triangle where the interior wall meets the ceiling and drywalled over that to reduce the typical thermal bridging there.

For more information on reducing home energy use to a minimum, read: The Homeowners Handbook to Energy Efficiency.