Most of the hazardous particulates enter the home from outdoors. The airtightness of a home is the most important factor to minimize airborne particles, known as PM2.5, in indoor air. PM2.5 means particles of less than 2.5 microns in diameter. Indoor air in leaky buildings may have around 45% to 60% of the particle concentration as outdoor air. Airtight buildings’ indoor air may have less than 30% compared to outdoors. Of course if the windows are open, then indoor air particle count is the same as outdoors.

With natural circulation among rooms, efficient air filters can significantly reduce particle pollution in homes. The best places for filters are in forced-air HVAC systems or in balanced ventilation systems. Room air cleaners can also be effective particle removers, if home’s 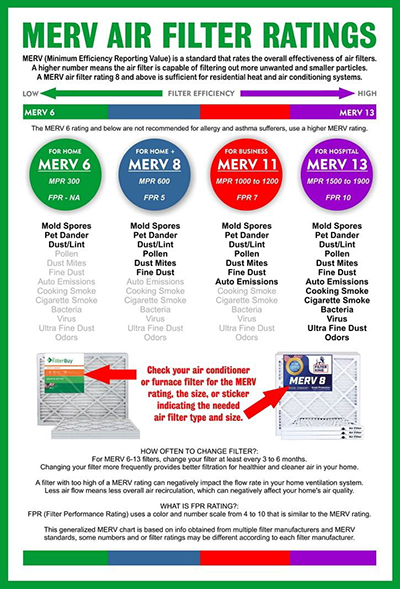 The most common filter-rating method is the Minimum Efficiency Rating Value (MERV). A higher MERV rating means that the filter removes more particles and a higher fraction of smaller particles compared to low-MERV filters.
Before choosing the type of air filter, consider its MERV rating and a home’s need for particle removal. Particles are a health hazard in cities, near busy highways, near seasonal farming activities, and in regions with forest fires. Unless you have a high particle count in your home, a high MERV (MERV 16) filter isn’t necessary or desirable. Before considering a high-MERV filter, thoroughly air-seal your building because air sealing is a more effective way to control particle infiltration compared to filters.

This MERV rating system divides particles into three size categories: 0.3–1, 1–3, and 3–10 μm. The two smallest categories are the most important for human health, as small respirable particles (PM2.5) can more easily deposit in the lungs compared to larger particles.
The MERV ratings of available HVAC filters range from MERV 3 to MERV 16, with higher ratings removing more particles at smaller sizes. A MERV 3 filter captures large particles — clothing fibers, pollen, and dust mites, but few smaller respirable particles. A MERV13 filter captures more than 70% of all three particle sizes, including bacteria and tobacco smoke. The minimum MERV rating to remove 50% of the respirable 1–3 μm particle-size range is MERV 10. If the HVAC blower operates continuously or for long cycles indoor air will pass repeatedly through the filter and become progressively cleaner with each pass. 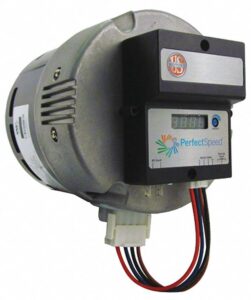 ECM motors maintain a constant airflow to move the air through the filter and to maintain an optimal airflow to the building. The airflow is constant, but the energy use is variable.

HVAC designers designed air handlers for use with low-MERV filters with a small pressure drop. Changing to higher-MERV filtration can cause the filter pressure drop to increase and the system airflow to decrease. High pressure may cause blowers to fail prematurely as they struggle to overcome system pressures beyond their design specification. For heating systems, the furnaces may overheat and cycle on their high limit switches. Airflow reductions in cooling systems risk coil icing and premature compressor failure. If a one-inch thick filter produces too much static pressure, you can modify the filter slot to allow a two-inch filter that has more surface area and lower static pressure.

Permanent-split-capacitor motors (PSC) produce a measurable airflow in direct proportion to the system static pressure. Brushless-permanent-magnet (BPM), also called electronically commutated motors (ECM), move air at a constant volume and variable energy consumption. You can optimize the airflow for a forced-air HVAC system with an ECM motor, which is why they are preferable.
The volumetric airflow rate of a blower is directly proportional to the energy consumed by the blower motor. Therefore, as the HVAC system’s static pressure goes up, a PSC motor uses less energy because it moves less air. On the other hand, an ECM motor uses more energy to maintain a constant airflow when static pressure increases. Better to supply the forced-air system with the airflow it needs to maintain its optimal efficiency. Also, better to adjust the airflow depending on the MERV rating of the filter.

The need for high-MERV filters depends on three factors.

If you live in a rural area with little air pollution or dust, a high MERV air filter isn’t necessary. However a high-MERV filter may provide important IAQ benefits if you live in a location with lots of smog, pollen, road dust, or seasonal forest fires.