Once upon a time, builders stapled 15-pound asphalt felt to wall and roof structural sheathing as a water-resistive barrier (WRB). The 2012 International Residential Code (IRC) still specifies: “one layer of No. 15 felt… or other approved water-resistive barrier.” Most builders used perforated felt to allow water vapor to escape the wall cavity years age. 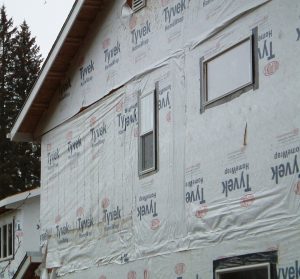 Then came house wrap, various types of vapor-transmitting spun-bond or perforated plastic sheeting that hopefully also shed water. These WRB products became the building assembly’s last resort to prevent wetting of wood sheathing. Somehow, house wrap got the reputation of also being the building’s air barrier. As a material, most house wraps are air barriers, however as installed they leak air at joints and fasteners.

Investigators Lawson, Quirouette, and McDonald from Morrison Hersfield Limited, working for the Canada Mortgage Housing Corporation (CMHC), reported that house wrap fails as an air barrier some time after construction in windy areas unless sandwiched between two layers of fiberboard. In their experiments they had to use fiberboard to protect the house wrap from failing from air pressure due to wind, building mechanical systems, and stack effect.
This air barrier research, conducted in the early 1990s, should have squelched the hope that house wraps could function as air barriers when stapled and taped to the surface of structural sheathing. Even if the house wrap was perfect air barrier when workers applied the cladding, high winds and other pressures can pull the house wrap through its staples and separate its seams.  A few times, I’ve heard house wrap rustling and squealing behind the cladding of a wall during high winds here in Montana, particularly during construction before drywall application. House wrap, as well as any other flexible material that isn’t continuously bonded to the structural sheathing, won’t last the life of a building as an air barrier in most buildings. 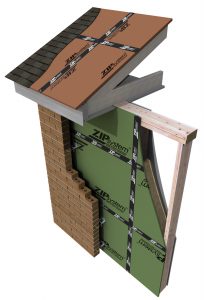 WRB bonded to sheathing by the manufacturer.

Nevertheless builders and others remain confused about the function of house wrap. Many people refer to house wrap as the air barrier. First and foremost house wrap is the building’s code-required WRB. We assume it is watertight..
Joe Lstiburek and others have done empirical tests, finding that most WRB products are watertight but that some aren’t. In year-2000 empirical testing by Paul Fisette at UMass Amherst, he observed leakage through the perforated house wraps and at nail penetrations in all house wraps. In very humid climates, house wrap may grow black mold while waiting for its cladding. Many in wet climates still use 15-pound felt, which is no longer 15 pounds per hundred square feet and no longer as waterproof as used to be.
If we want to material to be the air barrier along with the WRB, we need to use a liquid applied system, or a factory bonded WRB-to-sheathing system (such as: ZIP sheathing) along with joint sealing and penetration sealing for permanent air-barrier solution. And also, let’s make sure that the house wrap or other WRB really does shed water and that the joints and fasteners don’t leak.