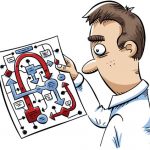 We’ve been dealing with the ASHRAE ventilation standard for a while. 62-89 goes way back. We used that one for a long time, and it worked well enough. After we taught our students how to use 62-89, they could understand it and implement it. Then came 62.2. We first wrote about 62.2-2010 in this blog back in 2011. Then in 2012 we vented about the complexity of the calculations. Unfortunately 62.2-2013 isn’t much better.

We recently updated our training module for the ASHRAE Ventilation standard from 62.2-2010 to 2013. A lot of folks stumble on the infiltration credit. We’re simply saying that it’s too complicated of a calculation to do by hand and to just use a tool like RedCalc from Residential Energy Dynamics. The folks at RED have done a great job with that calculator, but I question why the calculation needs to be so complicated that a such a tool is needed. I also think that many people get so caught up in calculating the infiltration credit that they fail to learn about the other parts of the standard. I know some of our students do that.

So in our lesson I’m trying to at least mention each section of the standard and describe its intent. But some of the sections are so unclear that its very difficult to understand or interpret what the requirement is, let alone teach it to our students.

Here’s some examples and the questions I’m asking.

Here at Saturn we’ve always said that standards should be written to be understood by the intended audience, rather than by the engineers and scientists that write them. Confusion for the audience distracts from mission. Over time parts of a standard may become outdated, irrelevant, or actually contradictory to other parts of the standard. We’re picking on ASHRAE here, but the problem persists with a lot of standards that we have to deal with in our industry.

We’re interested to hear what you think. Has the ASHRAE ventilation standard, or some other standard, made it difficult, or even impossible for you to complete your job successfully? What do you do in your work if you can’t comprehend a standard that you’re supposed to follow? Do you just follow the parts you understand and ignore the parts that are too complicated?