What the EPA Says

EPA’s new final rule on Carbon Pollution Emission Guidelines for Existing Stationary Sources: Electric Utility Generating Units
“Energy is transmitted, not electrons. Energy transmission is accomplished through the propagation of an electromagnetic wave. The electrons merely oscillate in place, but the energy – the electromagnetic wave – moves at the speed of light. The energized electrons making the lightbulb in a house glow are not the same electrons that were induced to oscillate in the generator back at the power plant. . . . Energy flowing onto a power network or grid energizes the entire grid, and consumers then draw undifferentiated energy from that grid.
A networked grid flexes, and electric current flows, in conformity with physical laws, and those laws do not notice, let alone conform to, political boundaries. . . . The path taken by electric energy is the path of least resistance . . . or, more accurately, the paths of least resistance. . . . If a generator on the grid increases its output, the current flowing from the generator on all paths on the grid increases. These increases affect the energy flowing into each point in the network, which in turn leads to compensating and corresponding changes in the energy flows out of each point.” 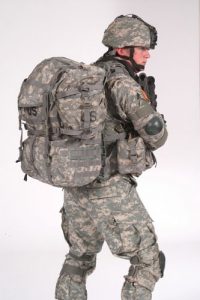 The electron soldier with energy in his packpack.

What the Units of Measurement Say

If the electrons don’t move, that fact is at odds with the definition of an ampere of electrical current and a volt of electrical potential. I learned in college that an amp is a coulomb of charge (6.02 x 10^23 electrons) streaking past a certain point in one second. The moving electrons carry the energy: one volt is a joule of energy carried by each coulomb of electrons. Maybe the scientists rewrote the definitions of amps and volts, while I wasn’t paying attention.

What my simple mind remembers

My simple mind prefers this definition: Electric energy is carried by rapidly moving coulombs of electrons which are like legions of tiny soldiers carrying the joules of energy in their backpacks toward the load. At the load, the little soldiers unload their backpacks of the energy and return wearily to ground. Other electrons in the ground near the generator are drafted into service and given backpacks full of energy. These new recruits carry energy to more loads.