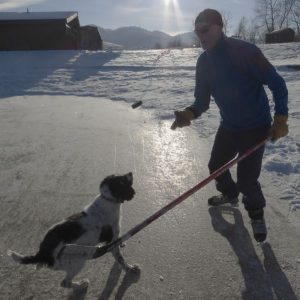 The game begins with the opening face off.

My wife Mary, our dog Finny, and I were this season’s first skaters testing the ice at Spring Meadow Lake. We didn’t invite anyone else for fear that the thin ice might give way. Fortunately, the 2.5-inch-thick ice sheet proved support enough for a couple of humans and a dog.
Noticing that I’d brought my hockey stick, Finny immediately challenged me to a game of dog hockey. The object of dog hockey varies depending on whether you are the dog or the human.
After the face-off, the dog scores one point by intercepting the puck within 2 minutes of human puck-possession using paws, jaws, and puck-blocking belly flops. The human skates toward the dog and tries to move cleanly around him again and again hoping to keep the puck out of the dog’s mouth for two minutes in order to score one for the human team. 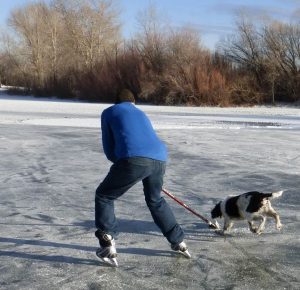 Covering the puck with my stick blade, I score one for the humans.

This isn’t a sport for the safety-conscious participant because both man and beast battle ruthlessly with skates, stick, fangs and paws, in addition to savage body checks.

Finny, baptized Finley Clark in 2006, is a 55-pound field springer spaniel and the most ardently competitive canine we’ve ever known. Mary named him for Flathead Lake’s Finley Point and for Captain William Clark of the 1804 expedition.
Since his owners don’t hunt, Finny finds other sports to excel at. He considers all balls, frisbees, and hockey pucks to be his personal possessions, which he confiscates from anyone caught using them. 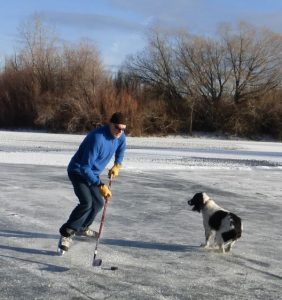 Baffling my opponent with a backhand-to-forehand sweep, I skate past while Finny slides off in the wrong direction, his tail between his legs. 3-2 my favor.

I’m grateful for the dog-hockey advantage of my skates versus Finny’s slippery pads, but that only means that I may possess the puck for two or three minutes at best before he claims his prize to score. Any weak deke or predictable dribbling results in puck-confiscation by the hockey dog.

The Making of a Champion 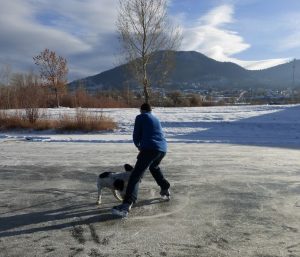 Dropping his head, Finny drives his body into my left knee, knocking me sprawling onto the ice. Game tied 3-3.

Finny showed brazen courage in his youth by repelling an amorous 150-pound billy goat, who tried persistently to mount our nephew Joe. One summer in the Bob Marshall Wilderness, he chased away a 500-pound grizzly while carrying 10 pounds of dog food in a pack on his back. He scares us by perching himself on thousand-foot-cliff edges, tail straight out, nose pointing into the horizon.
At home, Finny is less courageous, hiding under beds when anyone raises his or her voice. 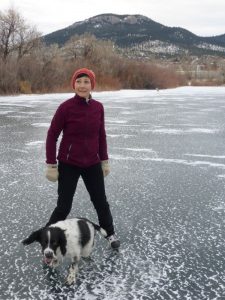 Dog hockey coach and referee, Mary Coster releases her dog from the penalty box after a two-minute penalty for unsportsdog-like conduct.

On Sunday, Finley Clark defeated John Krigger in a hard-fought game 4-3 to start this season of the Helena Inter-Species Hockey Federation (HI-HO!). In a post-game interview, Finney was unable to answer questions from the media because his jaws were clamped unflinchingly to the puck. The only easy way to secure the puck’s release is to drop another puck.

The Disadvantages of Dominance

Poor Finny can’t attend when humans play ball, frisbee, ice hockey, or any other sport involving a moving object. Tied up, he whines and barks incessantly. Free to roam, he dominants play, ignoring the rules of the game.
Finny can throw a frisbee, but chooses to throw it only to himself. 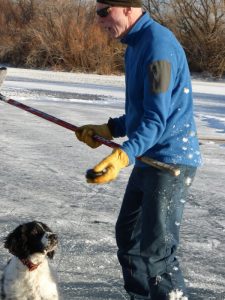 Shaken by the vicious take-down, I prepare to face-off. Finny, tasting victory,fixes his unapologetic gaze upon his trophy.