Frost is Your Friend

It was a bit chilly in Helena, Montana the other day. A cold front from Canada combined with clear skies to take the temperature down to 3°F. Great conditions for frost. Not Robert Frost the American poet. I’m talking about hoar frost. When conditions are the way they were last night, hoar frost forms on surfaces exposed to the clear night sky. To quote Wikipedia “Hoar frost (also called radiation frost or hoarfrost or pruina) refers to the white ice crystals, loosely deposited on the ground or exposed objects, that form on cold clear nights when heat is lost into the open sky causing objects to become colder than the surrounding air”. Ain’t science cool? But what if the surface is your house, and that surface is being warmed by heat loss from the house?

If you look at houses through the lens of  building science, then frost can be your friend. I snapped this photo on the way to work. A tranquil little neighborhood behind Saturn’s offices. Notice anything? Click the picture for a closer view. First take a look at the house on the left. There is no frost on the main roof. There is frost on the porch roof, but not on the part close to the dormer wall. Both roof surfaces have equal exposure to the sky and the same facing angle to the sun and sky. So why does only the front of the roof porch have frost on it? It could be that heat loss through the roof kept frost from forming. Since the porch roof is exposed from below, it got cold enough for frost to form on the roof. What about the back side of the porch roof? Maybe heat loss from the dormer wall kept that part of the roof warm. Or maybe the sun’s heat reflected off of the dormer wall and melted the frost. In any case an energy auditor should probably take a closer look at the attic insulation. 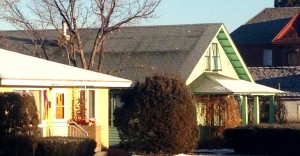 Next look at the green colored house toward the right. This one is particularly telling. The windows over the porch tell me that there is probably a bonus room up there. That space likely has a sloped ceiling and knee-walls. I’m also guessing that room has comfort issues. Look at the frost patterns on the roof. Can you spot where the top of the knee-wall is? How about the roof rafters? Judging by the wide, frost-free band, I’m guessing that the junction between the ceiling and the top of the knee-wall isn’t insulated well, if at all. Or warm air is collecting at the top of the attic space behind the knee-wall. In any case the knee-wall attic could probably use a good insulation and air sealing job. Energy Vanguard has a good post on the right way to do that. Another area to note is along the back of the porch roof where you’ll see a distinct edge to the frost. The eave above blocked this area from exposure to the night sky, keeping it from frosting up.
You can see these same frost phenomena on other parts of the house. Sometimes exterior-wall studs, which act as “thermal bridges”, can keep frost from forming on exterior wall surfaces. You’ll see vertical frost-free bands on the walls. Or you might see entire wall cavities which lack insulation.
If you’ve read this far, but were disappointed that the post was not about Robert Frost, here’s a short poem for you. 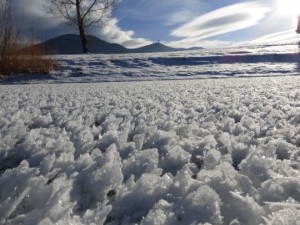 Hoar frost on the surface of Spring Meadow Lake in Helena yesterday.

Some say the world will end in fire,
Some say in ice.
From what I’ve tasted of desire
I hold with those who favor fire.
But if it had to perish twice,
I think I know enough of hate
To say that for destruction ice
Is also great
And would suffice.