Hands-On Training: The Worst Can Happen 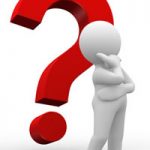 Bruce Manclark and I were training contractors in Pacific Power’s mobile-home weatherization program in a mobile-home court in Yakima, Washington during 1994. We were working on three mobile homes with about 30 participants; insulating, air-sealing, and performing maintenance on heating and cooling systems. At the end of the second day, we buttoned up one roof that we were blowing from the edge in a temporary way. We would finish blowing it the next day.  Little did we know of what lay in store for us.

What’s the Worst that can Happen?

The next morning at 6:30 AM, I was sitting with Bruce and some other technicians, about to eat some bacon and eggs. Bill Winslow, the Pacific Power rep tapped me on the shoulder as I prepared to dig into my meal. “The roof of Mrs. Sherman’s mobile blew off last night,” he announced. That was the first time I ever walked away from breakfast!
Out at the site, it was pretty ugly. A freak storm with northeast winds gusting to 70 mph got under our temporary seal and ripped the entire roof off the fasteners on one side and both ends. The roof remained fastened to the other edge, which acted as a hinge for the roof as it banged against the side of the Sherman residence in the windstorm all night long. Luckily for us, we were working for a very patient woman with a great sense of humor. 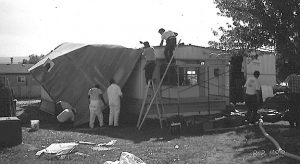 I alternatively felt sick and lapsed into silly giggling while inspecting the damage.

The fiberglass insulation we installed was soggy wet, but somehow it had remained in place. We were all impressed at the good coverage we were achieving because, of course, we could see the whole roof cavity. Bruce and I assembled the participants and begged them for their cooperation in putting this mess back together; promising to buy large quantities of beer and snacks after work. The group set to work, eagerly repairing broken trusses, stuffing insulation, and sheathing the roof with quarter-inch plywood.
Bruce returned from the lumber and hardware dealers just as we were ready to flip the roof back on the home. It was about noon and the fiberglass insulation was completely dry.
Bruce bought two-by-fours, several hundred feet or rope, and every single C-clamp for sale in Yakima Washington. We stiffened and straightened the loose roof edge by sandwiching it between two two-by-fours, pressed together with the C-clamps along the roof’s entire length. Ten ropes were attached to the ten C-clamps, and then thrown over the roof to ten waiting participants. The remainder of the group lifted the roof away from the wall, propped it up in the air with two-by-fours, and waited for the signal to push. I stood on the roof near the far edge watching this spectacle, and waiting for the right moment to give the signal for the pushers to push and the pullers to pull. I only wish someone could have filmed this splendid moment, but alas, all hands were needed for pushing, pulling, and praying.
I shouted the command and immediately wondered why I was in the path of this flying hunk of sheet metal! I figured that the roof wouldn’t flop back into its original position on the first try and that my perch at the roof’s edge was safe haven. But the roof lurched into the air high above the home, then folded as the first six feet came to rest on the new sheathing. The profile of other half coiled into an S-shape, and as the rope pullers pulled mightily, the sharp roof edge came hurtling toward my ankles. Reflexively I jumped just in time as the metal snapped taught and slammed down noisily under my feet. At first there was silence, but then cheers arose. We had wallowed in shit, but we smelled like roses now. The penetrations for plumbing vents and chimneys lined up perfectly, and the roof was soon restored to better-than-original condition.

I wrote a letter to Bill Winslow when I invoiced Pacific Power for the seminar. The letter’s last paragraph went something like this:
People often ask, “What is the worst that can happen?” Helping customers to answer that important question is just part of our job.