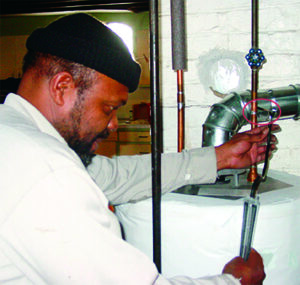 The word draft creates confusion because there are two common types of draft and a technician seldom identifies which type. The 2 types of draft are: overfire draft and vent draft. Overfire draft is the draft over the fire inside the combustion appliance and vent draft is the draft measurement in the vent. We use the term vent as a general term meaning: vertical chimney, vent connector, or horizontal vent. You measure both types of draft with reference to the mechanical room.

Many ambiguous terms describe draft and the associated combustion equipment. Atmospheric or natural draft occurs in an appliance or vent that has no fan to move the combustion gases. In these simple  heaters, the flame’s heat moves the gases through the appliance and out the vent, which is usually a vertical chimney. Technicians usually measure overfire draft at 0.02 inches of water or 5 pascals. Vent draft—atmospheric or natural—varies with the height of the chimney, the chimney’s cross-sectional area, and the exhaust-gas temperature.